Response regarding 'LIES' on book Shahbag Shahbag by Aamra

The wave of protest in Bangladesh’s  Shahabag square were set off by the seemingly  belligerent demand of ‘capital punishment’ for the war criminals, the Rajakars of 1972 liberation war. We all know it better that Shahabag movement was against the brand of political Islam whose leaders perpetrated the war crimes. A civil war like situation erupted throughout the country from February 2013 and a more organized and strong radical forces (Jamat, Hefajat) paralyzed normalcy, peace, democracy. Here in Kolkata we also noticed the activities of their Indian counter-part (of political religion), i.e. the political Islam, Hindutva. The vigor we viewed in Shahabag is quite different from Tahrir or its other Arab Spring cousins and also exceptional by nature for its essence against religious fundamentalism. In this book we had an initiation to narrate the facts, facets and impulse of the movement and here we tried to accommodate some news, reportage, article, editorials, notifications, commentaries, online chats, hand-bills to bestow views from diverse viewpoint. It is true that the time to analyze a contemporary movement is important and historicity always puzzles between probabilities and proximities. We admit this limitation in the beginning. 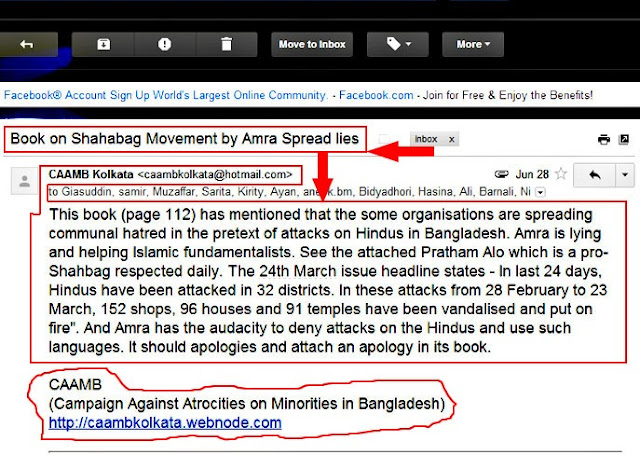 But here criticism came out with an intention to blur and blurt this book by using ‘helping Islamic fundamentalist’, ‘spreading lies’ etc, these had perceived by us that whether we ‘bring a hornets’ nest about some ones ears’. Page 112 to 126 of this book (Bhinno mot ei Bonge- different opinion in this part of Bengal) gives emphasis to certain publicized news, editorials, post-editorials, leaflets which contains propaganda in accordance with their religio-political agenda. Media like Qalom, Mizan always have a target to introduce political version of Islam using the phrases from the text among the Bengali-speaking Muslims in West Bengal. On the pretext of Shahabag movement they again start provocation by publishing news, articles etc to malign movement. However the groups like Hindu Jagaran Manch, Swastika play the other side of game by supporting movement; spreading insecurity feelings and terror among Hindus by telling decade long ‘Hindu endangerment’ hoax copied from  century long ‘Islam khatre me hai’(Islam in danger) slogan. This book brought up the events of torture, murder on Hindu community with apparent magnitude in the page of 62-63, 67 and also on 74. We opine these attacks as a part of Jamat-I-Islam agenda to Islamize Bangladesh by eliminating Hindus and other minorities (ethnic and religious, like Christians, Chakmas); liberal, secular Muslims and Civil Society. Shahabag stands against this form of radicalization and probably for the first time after liberation war of 1971, Hindu-Muslim took part in a mass agitation program. Our feelings stand fast with their emotions, followed by raise voices against our own brand of fundamentalism. So we are ‘melting, melting and melting, nothing remain except some agitation, street drama, documentary-show, publication etc’. We already got threatening, remarks calling us Taslimaist, NGO, Maoist, RSS (what more?). They posted on facebook and mailed a lot by commenting that this book and our agitation program will strengthen the hand of Hindu fundamentalists. And then this new gharana of attack came in when we blamed as helper of Islamic fundamentalists demanding an apology letter with this book. After melting by the heat of beacon of Shahabag, now we can identify ‘strategic relation’ between two sides of darkness. It is interesting. It is also encouraging that we are running in a right track.

[Demystifying certain parts of any book is nothing but to fabricate truth. Their mail-ed version of criticism might indulge propaganda (propaganda may increase a book’s graphical figure of sale) or kept on tenterhooks. So we keep unvoiced and disagree with the theory of ‘reflex action’. Some of our friends ask annotations from our side but we refuse to budge on that naked criticism. And finally when we are going to re-publish the 2nd edition of the book we desire to deliver our response. Stipulating with a line, please read the book, not only a certain part and then act in response, we have courage to say, what is what and also have sincerity to rectify and ratify.]