Respected Sir,
I want to draw your kind attention on an incident of blaming a family of Schedule Tribe; Santhal community, as involved in witchcraft and subsequently throwing them out of their dwellings, looting of all belongings and gruesome violence over the women of the family with sexual advances. The police not taken appropriate actions, even registered an FIR where put the date of information from victim family wrong and till date not relocated them to their own dwelling, in the meantime all of their belongings were usurped by the errant.  The family of Mr. Gopal Murmu was defamed as the family of Witch by a section of villagers from the Hindu General Caste and a handful of from Schedule Tribe Community with ulterior intention. Our fact finding report provides the details of the whole incident.

On the date of incident; 20th June at about 11 pm, the under mentioned persons trespassed into victim’s house. The alleged them as Witch and started to assault them with all brutality, while the victim family tried to protest against their false allegations. The perpetrators molested and brutally assault the victim’s daughter named Ms. Sajani Hasada after alleging her as witch. They were forcibly taken to one of the perpetrators house and asked to make cure a child who was under some kind of psychological ailment at that time. The perpetrators evicted the victims from their own house. The victim lodged a written complaint before the Officer-In-Charge of Polba Police Station on 21.06.2013. On next day the Officer-in-Charge of the said police station asked the victim to mutually solve the issue instead of doing any investigation over the incident.

The complaint before the police dated 21.6.2013 was totally ignored and while the Polba Police registered a FIR on 5.7.2012 (Polba Police Station Case No. 55/2013 dated 05.07.2013 under sections 147/149/148/223/354/427/379/504/506) of Indian Penal Code they describe the date of information only on the said date, which was suppression of fact on their part. It was further revealed that the complaint shown with the FIR was tutored by the police station to make it mild.  The Polba Police purposefully ignored the appropriate sections of Schedule Caste and Schedule Tribe (Prevention of Atrocities) Act 1989, while putting the sections of offence. The victim Mr. Gopal Murmu lodged a written complaint before the Block Development Officer informing the whole incident of physical torture and allegations as Witch upon them by the perpetrators on 25.06.2013.  On 09.07.2013, Mr. Gopal Murmu lodged a similar complaint before the Sub-Divisional Police Officer, the District Magistrate and the Superintendent of Police, Hooghly informing the whole incident of physical torture and false allegations upon them by the perpetrators. On 11.07.2013 the victim received a letter from the office of the Sub-Divisional Officer where the Sub-Divisional Officer directed the Officer-In-Charge; Polba Police Station vide Memo No- 1987/1(1)/S to cause an enquiry and take appropriate action in accordance with law. But the Officer-in-Charge failed to take any necessary action after getting the order from the office of Sub-Divisional Officer, till date and the victim family is still waiting to return at their own house. On 05.08.2013 the victim received a letter from West Bengal Human Rights Commission where the Registrar of that said commission directed Superintendent of police, Hooghly vide case No- 266/8/13-14/OC/351 to cause an enquiry and take appropriate action and submitted the report to him within three weeks. But till date no such action has been taken.

Hence we seek your urgent intervention and appending a detail of the incident herewith: -

Place of occurrence: - In the dwelling of the victims.

Case details: -
It is revealed during fact finding that Mr. Gopal Murmu and his family members are belonging to the Schedule Tribe (Santhal) Community. On 20th June 2013 the victim and his family were inhumanly tortured by the caste Hindus and few people of his own community with ulterior motives after blaming them as ‘Witch’. In this regard it must be mentioned here that the family was on and often faced the situation of social and community level isolation, 26 years ago i.e. in the year of 1987, the victim and his family members were branded as Witch. On 18th July 1987, Late Bidhu Murmu; the mother of Mr. Gopal Murmu, aged about 75 years at that time was branded as ‘Witch’ and demand was made for Rs. 10000. Subsequently all family members of Mr. Gopal Murmu were thrown away from their own house by the village heads of the said village while they failed to pay that amount.

The recent incident was follow up of the event which started in the year of 2007, when Mr. Rajkabi Murmu tried to make a club in front of the house of Mr. Gopal Murmu and tried to include the victim’s land to the club. The victim informed that whole incident to Mr. Nokul Soren, the then Prodhan (Head) of gram panchayet (local self government) and he interfered to that issue and successfully solved that issue for time being. The conspiracy was hatched against the victim family at that time only. In the year of 2012, a section of villagers termed Mr. Gopal Murmu’s elder daughter ; Ms. Rina Mandi, the wife of Mr. Sanatan Mandi as ‘Witch’ and that time also the whole matter was mutually solved by the victims’ family and the involved villagers.

On 20.05.2013 at about 11pm the above mentioned perpetrators and other 50/60 involved people of Dakshinpara village suddenly attacked to the victims’ house and told the family that the existence of the ‘Witch’ ‘Dain’ with his family and that with had an involvement with the ill-health of Mr. Rajiv Baidya, son of Mr. Rajkumar Baidya. They broke the glass pane of all windows of the victims’ house. They verbally abused them with filthy languages and criminally trespassed into their house after breaking the gate of the victims’ house and started to assault them by wooden sticks. Mr. Gopal Murmu was seriously injured due to that brutal torture by the perpetrators. The perpetrators damaged all house-hold articles took away Rs. 80,000/- cash and silver ornaments after breaking the ‘Almirah’. The perpetrators unclothed Ms. Sajani Hasada, daughter of Mr. Gopal Murmu and molest her during this savage act they forcibly pulled inner apparels from her body and dragged her by the road for 1 km. Ms. Purnima Murmu; daughter in law of Mr. Gopal Murmu tried to hide under the cot with her 10 months old baby but the perpetrators not even spared her and her baby. The baby received serious head injury due to the said physical aggression. The perpetrators brutally assaulted and injured Mr. Bishnudeb Murmu, the youngest son of Mr. Gopal Murmu while he tried to protect her from the hand of the perpetrators. The wife of the victim was also brutally tortured in the hands of the perpetrators. The perpetrators dragged and took the Mr. Gopal Murmu and other family members to the house of Mr. Rajkumar Baidya at Dakhinpara village and there they came to notice that an ‘Ojha’ was present beside a baby of 8 yrs old named Master Rajiv Baidya, the son of Mr. Rajkumar Baidya. The ‘Ojha’; Mr. Mongal Murmu passed an order by stating that Ms. Sajani Hasda; the daughter of Mr. Gopal Murmu as a witch and she is responsible for the ill-health of that child. She tried to protest against his false allegations by stating that how would it be possible and advised them to medically treat the baby. But the perpetrators refused to hear her words and brutally assaulted her. Meanwhile Mr. Govinda Murmu, the elder son of the victim who was in Chennai for his job came to know about the whole incident and he made a call to Polba Police Station and requested to the police personnel of the said police station to protect his family members from the hands of the perpetrators. Mr. Dilip Hasda, the brother-in-law of the victim and Mr. Bishnudeb Murmu successfully escaped from the house of Mr. Rajkumar Baidhya and came in to the said police station to request the police personnel to protect their family members from the hand of the perpetrators. On the date of incident at 11.05pm, Ms. Sajani Hasda made a phone call to Polba police station to inform when the perpetrators broke the gate of the house of the victim, but the police personnel did not receive that call. On the same day at 00.10 hours, the police personnel of that said police station came to Dakhinpara village and rescued the victim and his family members from the hand of the perpetrators at about 00.40 hours. The victim and his family members afterwards took shelter to that said police station after police provided them first aid at Polba Block Primary Health Centre.

On 21.05.2013 Mr. Gopal Murmu lodged a written complaint before the Officer-In-Charge of Polba Police Station informing the whole incident of physical torture and false allegations made against them, the said complaint was diarised as General Diary No. 1155 dated 21.06.2013, but no FIR has been registered.

On 22.06.2013 at about 6 pm, 150 caste Hindu villagers came to Polba police station and met the Officer-in-Charge of the said police station and convinced him for withdrawal of complaint and a settlement, the said Officer in Charge in return asked the victim to accept their proposal. While the victim shown his reluctance; the said Officer-in-Charge suggested for another date for mutual settlement.

On 25.06.2013 the victim lodged a written complaint before the Block Development Officer, Polba Dadpur Block informing the whole incident of physical torture and false allegations upon him and his family by the above mentioned perpetrators. But the said authority failed to give proper to the victim and his family members.

The police personnel lodged a First Information Report vide Polba Police Station Case No. 55/2013 dated 05.07.2013 under sections 147/149/148/223/354/427/379/504/506 of Indian Penal Code against the above mentioned perpetrators after 14 days of that incident over an obtained and doctored complaint from the victim; Mr. Gopal Murmu. The police personnel also made a seizure list mentioning that the victim reclaimed three cycles, 15 packages of paddy and 70 packages of sunflower’s seeds.

On 09.07.2013 Mr. Gopal Murmu lodged a written complaint before the Sub-Divisional Police Officer, the District Magistrate and the Superintendent of Police, Hooghly informing the whole incident of physical torture.

On 05.08.2013 the victim received a letter from West Bengal Human Rights Commission where the Registrar directed Superintendent of Police, Hooghly vide case No- 266/8/13-14/OC/351 to cause an enquiry and take appropriate action and submitted the report to him within three weeks. Till date the family members of Mr. Murmu are in continuous threat. 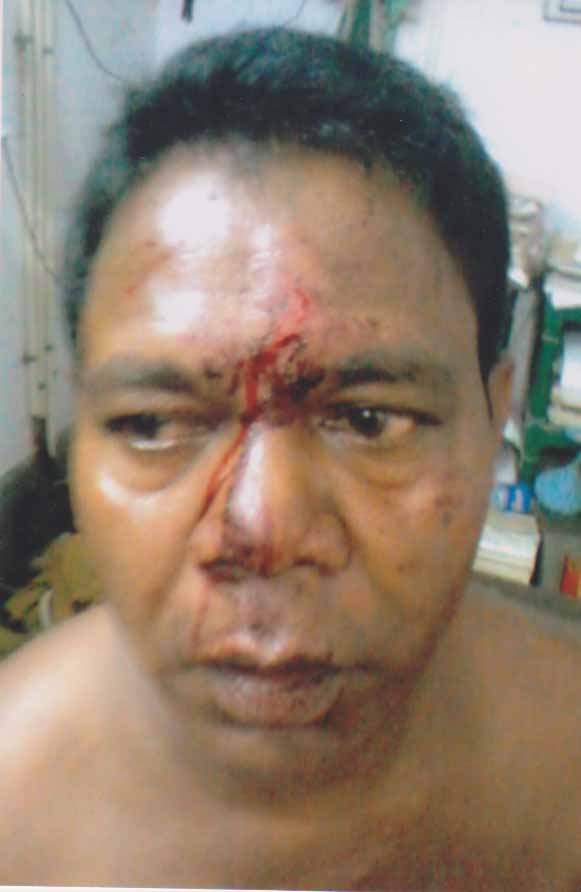 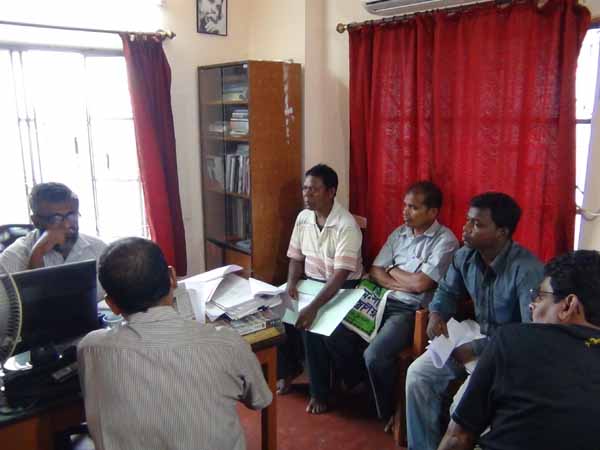 Mr. Gopal Murmu, His son and relative at MASUM office 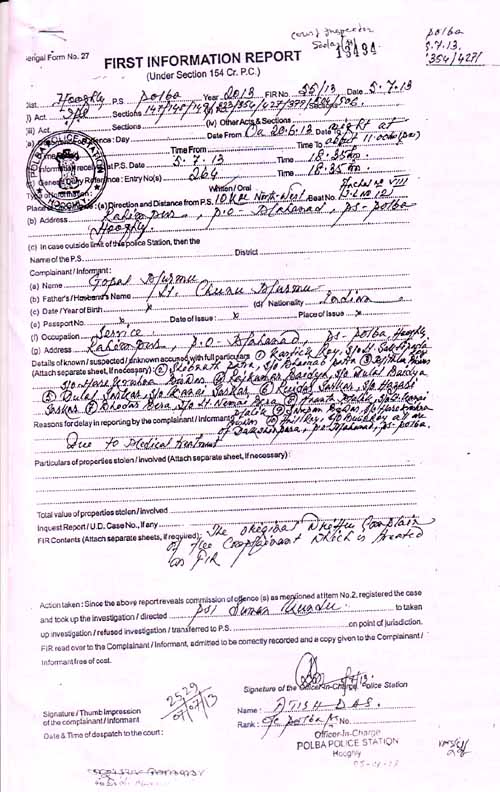